Welcome to thebuzz.energy (Site). Please read the following Terms and Conditions (Terms) that govern the use of and submission to this Site, as they constitute a legally binding agreement between you and PriMedia, Inc.

Rights to event postings submitted by users are owned by the user and/or the association named in the event. Submission of an event via the online submission or any direct notification to and request of PriMedia via email, phone or other method, authorizes and extends all rights and licenses for PriMedia and thebuzz.energy to share this content and make it available to other users.

Submission of an event constitutes authorization for thebuzz.energy and PriMedia, Inc. to use the information provided on the Calendar in any future sales, marketing or promotional materials.

Thebuzz.energy does not include training sessions on the public calendar at this time. Upon request, PriMedia will update your association page on thebuzz.energy at no charge with a link to the appropriate “training” or “education” page on the association website.

All event submissions will be reviewed and approved by PriMedia prior to posting to thebuzz.energy. PriMedia reserves the right to exclude any programs considered to be:

Any information that you or other users provide to thebuzz.energy is subject to our Privacy Policy, which governs our collection and use of your information. You understand that through your use of the Site you consent to the collection and use (as set forth in the Privacy Policy) of this information, including the transfer of this information to the United States for storage, processing and use by thebuzz.energy. As part of providing you these services, we may need to provide you with certain communications, such as service announcements and administrative messages. These communications are considered part of thebuzz.energy services and your account which you may not be able to opt-out from receiving.

As between you and PriMedia, you acknowledge that PriMedia retains all rights, title and interest in and to all copyrights, trademarks, trade secrets, patents and any other proprietary rights in the Site, the software and application programming interfaces comprising the Site, and all content therein. PriMedia, thebuzz.energy, its logo, as well as certain other PriMedia trademarks, service marks, graphics and logos, are the registered trademarks or trademarks of PriMedia. The Site may also contain third-party trademarks, service marks, graphics and logos. The Site is owned and/or licensed by PriMedia and is protected by the laws of the United States. You agree to prevent any unauthorized copying, use, or distribution of the Site. Except as expressly provided herein, PriMedia does not grant any express or implied right to you under any PriMedia-owned or licensed copyrights, trademarks, trade secrets, patents or any other proprietary rights.

You may terminate your thebuzz.energy account by submitting such termination request to PriMedia. You agree that PriMedia may, without prior notice, immediately terminate, limit your access to or suspend your thebuzz.energy account and access to thebuzz.energy. Cause for such termination, limitation of access or suspension shall include, but not be limited to, (a) breaches or violations of the Terms or other incorporated agreements or guidelines, (b) requests by law enforcement or other government agencies, (c) discontinuance or material modification to thebuzz.energy (or any part thereof), (d) unexpected technical or security issues or problems, (e) extended periods of inactivity, (f) engagement by you in fraudulent or illegal activities, and (g) nonpayment of any fees owed by you in connection with thebuzz.energy. Further, you agree that all terminations, limitations of access and suspensions for cause shall be made in PriMedia’s sole discretion and the PriMedia shall not be liable to you or any third party for any termination of your account or access to thebuzz.energy.

PriMedia may change the Terms and Conditions at any time. Notification will, to the best of our ability, be given to any and all registered users. 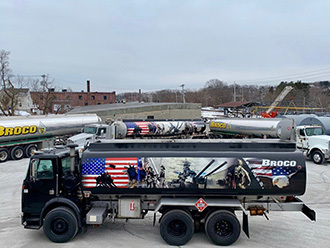 As partners to the heating oil industry, REG has plenty of "human interest" stories to share. Every winter, we see our blending partners go above and beyond for their customers, and we do whatever we can to help in that regard. Furthermore, as our fellow fuel sellers recognize, the job isn’t done once spring rolls around; customers keep calling, and we continue to answer the call 365 days a year.

With that being said, May 9 was an especially proud day for the REG Northeast offices. That’s because on this day, the U.S. Small Business Association (SBA) honored our latest blending partner, Broco Oil, of Haverhill, MA, as the 2019 Veteran Owned Business of the Year for Massachusetts. Accepting the award was Broco Oil’s founder, owner and president, Robert "Bobby" Brown. And we at REG would be hard-pressed to find anyone more deserving of this accolade.

Bobby Brown founded Broco Oil shortly after serving in the U.S. military, and the crisis management expertise he gained during his years as a Navy Seabee has been a staple of his professional career ever since. Just last September, Brown and his team assisted in Hurricane Florence recovery efforts in North Carolina, as well as Merrimack Valley Disaster recovery efforts in Broco’s home state of Massachusetts. But helping others in their time of need is nothing new for Brown and his employees.

"We got on this platform of offering our services nationwide because when I was in the military I was stationed in Gulfport, MS, and right when I was getting out, Katrina ripped through there, devastating the area," Brown explained. "I saw how critical fueling was for the national response, so when I got into the heating oil business, it was natural for me to offer that."

Since Brown started Broco Oil in 2007, the company has broadened its relief efforts from local to regional to national. They were also involved in the Hurricane Irma response in 2017, and when Florence ripped through coastal and central North Carolina in September of 2018, leaving 53 dead and $13 billion in property damages, Broco Oil was one of the first fuel suppliers to volunteer. In fact, Brown headed south in advance of the storm, bringing with him a crew consisting of Broco Oil delivery drivers John Smith, Cameron Wulff, Brian McPhee and Les Michick, and company mechanic Rich Cohan.

With hours-of-service rules suspended for the affected areas, our blending partner’s crew was on the scene during and after Florence to provide needed fuel for emergency backup generators and fleets assisting in the recovery. "Our last truck was down there for about three weeks," Brown said. Thanks to Broco Oil’s brave delivery and service team, REG 9000® biodiesel literally helped get the lights back on for North Carolina.

When we caught up with Brown to discuss Broco Oil’s role in the Hurricane Florence response, we found him pitching in to help out with another crisis. "I had to actually fly home from North Carolina to get our Columbia Gas response up and running, so we had two deployments going on simultaneously," Brown said.

As most in the energy industry remember, on the evening of September 13, 2018, a series of natural gas leaks, fires, and explosions ravaged the Merrimack Valley neighborhoods of Lawrence, Andover, and North Andover, killing two, injuring dozens, and damaging as many as 150 homes. In the wake of the Merrimack Valley Disaster, a number of impacted Columbia Gas customers decided to convert their homes back to heating oil, "which is very rare," Brown pointed out. Broco Oil was happy to help its neighbors make the switch to safer, cleaner Bioheat® fuel. At the same time, the company was fueling emergency response generators, once again helping to get the lights back on. "We delivered to 350 generators in a single day," Brown said.

For all his courage, determination, and self-sacrifice, Brown — who’s also a Fire Captain for the City of Chelsea — was quick to pass the credit onto his employees at Broco Oil. "A lot of these guys volunteer themselves," he said. "It’s really about the culture of the company, helping out first. We can always get back to regular business when the job is done."

Clearly, the Massachusetts Small Business Association recognized in Broco Oil many of the qualities Brown exemplifies. "National Small Business Week is a time to reflect on the significant achievements and community impact that our small businesses have on the local economy," said SBA Massachusetts District Director Robert H. Nelson. "It’s truly an honor to present these awards to this group of amazing entrepreneurs who are making a difference with job creation and community development."

REG couldn’t agree more. We are immensely proud to team up with everyday heroes like Robert "Bobby" Brown and his remarkable staff at Broco Oil. Through our recently announced partnership, REG and Broco will provide blended Bioheat fuel from an upgraded terminal in Haverhill, MA. The terminal will be upgraded with rail improvements and additional infrastructure to allow for blending opportunities at the loading rack. REG will ship distilled biodiesel to Haverhill from one of our production facilities.

"The partnership between REG and Broco is a great opportunity for both businesses to deliver a high-quality, cleaner fuel solution to the Commonwealth of Massachusetts," said Barry Knox, Director of Blended Fuels for REG.

Please join us as we welcome Brown and Broco Oil to the REG family and congratulate them on their well-deserved recognition.

Truly, every blending partner of ours has a unique and inspiring story to tell, and we at REG are honored play a part in it. If you’d like to see your company spotlighted in an upcoming edition of Let’s Blend, please contact our sales team.